Anti-Semitism is a misleading buzzword
masking massive crimes against humanity

“I want to tell you something very clear: Don't worry about American pressure on Israel. We, the Jewish people, control America, and the Americans know it."
— Israeli Prime Minister Ariel Sharon

"Our race is the Master Race. We are divine gods on this planet. We are as different from the inferior races as they are from insects. In fact, compared to our race, other races are beasts and animals, cattle at best. Other races are considered as human excrement. Our destiny is to rule over the inferior races. Our earthly kingdom will be ruled by our leader with a rod of iron. The masses will lick our feet and serve us as our slaves."
— Israeli Prime Minister Menechem Begin

This is not to make light of premeditated mass murder. But the behavior of Israel, the Jewish state, is so far beneath the basic minimums of human decency, that one can't help but emit a stifled, sardonic laugh at each day's new depredations by this "bastion of democracy in the Middle East." In fact, after its latest assaults on human decency — the invasion of its neighbor Lebanon — which came on the heels of a new elevation in the level of debauchery against the besieged Palestinians and also figures as the prologue to a wider war pitting the Western powers trying to turn Iran into flames — Israel is simply acting out its deranged holy orders to destroy or enslave everyone in the world who's not Jewish.

America teaching its children to lie, steal — and kill
1-1-04

At first you can't see the connection. After all, how many doors have you slammed in the face of some maddeningly pious Jehovah's Witness, or screamed into the phone at some gentle grandpa trying to raise money for the local fire department? Or, best example of all, how many times have you cussed out a homeless panhandler bugging you for spare change without contemplating the ragged family he may have squirreled away behind some nearby dumpster?

Most of us are too busy to care.

In the self-centered savvy of our synthetic 21st century American lives, we are taught not to realize that how we treat our enemies — or in our haste, those we would categorize as superfluous to our hectic agendas — has a direct and debilitating impact on those who we say are important to us. Our parochial perspectives teach others in our family how to be cruel. We are taught that some people are less deserving than others, that our way of life depends on recognizing and perpetuating these distinctions, and that's the way most of us live.

What happens when those distinctions become blurred? If we hate others on the basis of propaganda lies, how do we decide who we'll love and know the reasons are true?

'The Jewish Strategy' strongarms everyone down the path to hell

There could be no clearer proof that the Jews' mystery religion, a spiritual syphilis, has rotted the minds of our race and induced paralysis of our will to live.
— Revilo P. Oliver, 20th century classics professor and social critic

How could it be that the vast majority of the world's citizens fails to notice that a single notorious entity figures as the decisive factor in each and every crisis paraded before our eyes in this ghastly newsreel of life that now assaults our senses on a daily basis?

Murdering thousands of Gazan citizens for crimes they did not commit. Stealing an entire country in broad daylight, and starving and bombing its inhabitants to death, while its ruthless allies blame the victims who are being killed and the nations that are trying to help them. Hijacking the so-called bastion of freedom in the world and turning it into a snakepit nation of mindless killers who do not question orders they know are fiendish crimes.

Failure to use it destroyed the world

Finely dressed wordsmiths who pretend to be the hippest, most intelligent, most popular, most thorough, most insightful writers on the planet are still sticking to the same program that got us into all this trouble in the first place. And the schizzed out public is marching right along with them, investigating every nook and cranny of sadistic corporate perfidy and still coming up with the wrong answer. Why is that? Why won't anybody name the perps? It's so obvious. How can everyone not know? And if they do know, why won't they say it?

TELL THE TRUTH AND GO TO JAIL!

(Note for those who have an American public school education: Galileo Galilei was an Italian polymath who actually founded the scientific method. When he became the first human to formally propose that the Earth orbited the Sun, which was contrary to the fables of the Catholic church that ruled the world in the late 1600s, he spent the rest of his life under house arrest. Our beloved Holy Mother the Church apologized 400 years later.)

Paul was persecuted by Jewish officials for telling the truth to the Galileeans, just as those who declare historical truth and warn of the Jewish plans for the world conquest are persecuted today. In his letter he asks the question: “Have I become your enemy because I tell the truth?” (Luther Bible, 19212, Galileeans 4:16)
— Revisionist Clarion, 2009

Turning patriots into terrorists
. . . and terrorists into patriots!

Jewish propaganda has hypnotized Americans into a criminally irresponsible stupor

The absolute proof that we do not have a two-party system in America is that there is no political party objecting to the takeover of the U.S. by Jewish and Israeli interests.

Hijacked by a Foreign Power

As their nation disintegrates from a controlled financial demolition, engineered environmental disasters, and medical malpractice that has needlessly cost the lives of millions, the debilitated residents of the United States — perhaps too late to save themselves — are painfully waking up to realize their country has been taken over by a foreign power.

Our Leaders Deserve to Be Jailed

HOW CAN ANY DECENT PERSON BELIEVE IN WHAT AMERICA IS DOING?

You're either with the lie or against it

'The protests on Wall Street and around the world never mention Jews, which is a sure sign they're fake.'


What IS your country? Is it a representation of your hopes and dreams, fostering liberty and providing a healthy way of life? Does it protect you from harm and nurture you rather than exploit you? Does it treat you fairly? Isn't that what you voted for? Isn't that why you love your country?

Read more: Our Leaders Deserve to Be Jailed

What we choose not to see is the thing about to destroy us: Jewish control of our thoughts 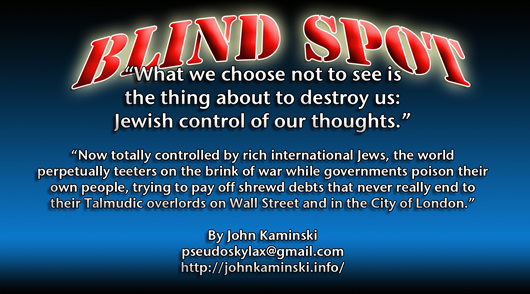 24th January 2011 Despite clear proof that Jewish influence destroyed from within the great civilizations of Egypt, Greece, Rome, France, Russia and Germany, citizens of the United States remain essentially blind to this same catastrophic threat that has prostituted their own government and is about to eviscerate their own country.

The Moral Illegitimacy of Governments

We don’t have leaders, statesmen, or philosopher kings anymore. We have bagmen for the Jewish financial mob that rules the known world with its money tricks, with not a patriot in sight when the orders come down from the big boys, the top Rockefellers, Rothschilds and Schiffs.