Turning patriots into terrorists
. . . and terrorists into patriots!

Jewish propaganda has hypnotized Americans into a criminally irresponsible stupor

The absolute proof that we do not have a two-party system in America is that there is no political party objecting to the takeover of the U.S. by Jewish and Israeli interests. 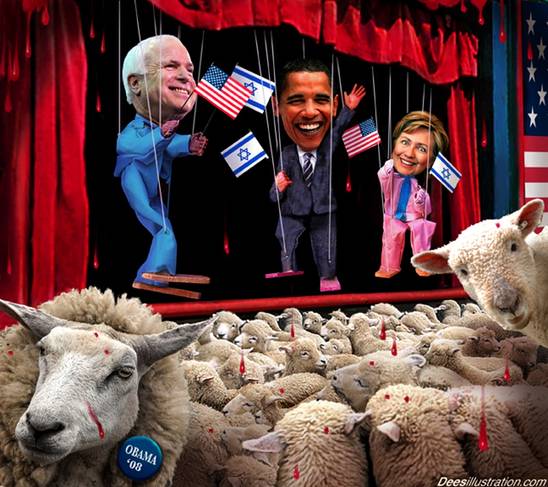 The medical profession has ruined itself by inventing new diseases so it can profit from the cynical manufacture of ineffective cures. AIDS is a case in point: the much publicized affliction still has never been precisely identified, but the so-called cure known as AZT has caused the deaths of many thousands of deceived victims. <https://www.cqs.com/azt.htm> <http://www.duesberg.com/papers/continu1.html>

The government has copied this despicable practice by creating terror threats so it can claim it has been successful in fighting terrorism and keeping the peace. The most infamous example, of course, is al-Qaeda, a group of Arab brigands morphed by Zbigniew Brzezinski into an all-purpose hit squad, falsely and deliberately implicated in the 9/11 atrocity, but later rehabilitated as a strategic ally of the U.S. police state in the invasions of Serbia, Libya, and other nations now lying in ruins, courtesy of the Jewish New World Order.

Both the FBI and the relatively new Department of Homeland Security — which is America’s equivalent to the old Soviet secret police — grossly inflate both the overall number of terrorist incidents and the number of those incidents they’ve solved, by triggering the incidents in the first place, then posturing as heroes when they arrest the patsies they’ve lured into the traps they’ve baited. <http://libertyblitzkrieg.com/2015/01/16/manufactured-terrorism-u-s-officials-claim-credit-for-stopping-another-terror-attack-created-by-the-fbi/>

Washington’s Blog phrased it best when it said: “Indeed, you’re much more likely to be killed by brain-eating parasites, texting while driving, toddlers, lightning, falling out of bed, alcoholism, food poisoning, a financial crash, obesity, medical errors or “autoerotic asphyxiation” than by terrorists” <http://www.washingtonsblog.com/2015/01/terrorists-muslim.html>.

So the government spends trillions to fight terror it creates itself while our infrastructure crumbles beneath our feet and our social systems are overwhelmed by the deliberately inflated avalanche of refugees from the Third World.

To make matters worse, 97 percent of Department of Homeland Security grants for 2012 went to Jewish groups, making it painfully obvious the DHS was created to protect the Jews, America’s undeniable overclass for practically all of the last century. <http://mondoweiss.net/2012/07/islamophobia-shmislamophobia-97-of-homeland-security-security-grants-go-to-jewish-orgs>.

The Israel suckups running our government don’t even bother to hide their treason anymore, as John McCain and other neocon flunkies openly consort with the terrorists they have created known as ISIS, ISIL or DAISH, alleged Islamic terrorists who dare not assault Israelis but ravage Muslims, Christians and others throughout the Middle East.

And now we have proof positive that the Jewish controlled U.S. government is funding the very outlaws it pretends to fight against with the publication of a declassified Pentagon report that admits Western governments and their sycophantic Persian Gulf states created ISIS in the first place <http://en.alalam.ir/news/1707399>.

The secret US Defence Intelligence Agency (DIA) document, obtained by Washington DC law firm Judicial Watch, and according to the internal report, which was distributed throughout the US intelligence community, emergence of ISIS was seen as a likely consequence of the West’s efforts to destabilize Bashar al-Assad’s government in Syria.

This insane deception, created in the same cynical vein as the 9/11 attacks that were blamed on Muslims but carried out by the Israeli Mossad, as well as the more recent hijacking of the Ukraine by Jewish killers, is simply more evidence of the dishonorable and underhanded tactics that have characterized America’s dirty and misleading politics throughout the 20th century that have actually injured the American people rather than kept them safe.

Now as this demonic Jade Helm exercise develops like a metastasizing cancer in the southwestern United States, one wonders if reports of an ISIS base in north central Mexico are true, and if the Jade Helm contortions are not related to feign countering this potential threat as a lame excuse to capture American patriots who realize the criminal intent of the Jew stooges who have captured the U.S. government lock, stock and barrel. <http://www.judicialwatch.org/blog/2015/04/isis-camp-a-few-miles-from-texas-mexican-authorities-confirm/>.

It would seem plausible, given the essentially unguarded condition of the U.S.-Mexico border, that these planners of overseas wars would want to bring the endless conflicts closer to and perhaps right into the United States as a perfect cover for rounding up American dissidents, which is what most observers think is the real reason for this macabre Jade Helm exercise in the first place.

Judicial Watch reported that documents in Arabic and Urdu were found at a base just a few miles from El Paso, and the users of them are being smuggled into the U.S. by the Juarez drug cartels. The Washington Post later called the story a hoax, but the Washington Post is itself a CIA-controlled hoax.

The one thing Americans should feel about the way their government has behaved over the past one hundred plus years is shame — unabashed, unrestrained shame.

But the majority of American are oblivious to all that. They drink their beer, wave their flags and go home and die premature deaths, largely because they pay no attention to what they put in their stomachs and the pollution they unthinkingly scatter about their own neighborhoods as they waste their lives on trivial pursuits.

The absolute proof that shows we no longer have a two-party system in America is that there is no political party objecting to the takeover of the U.S. by Jewish and Israeli interests, only two parties saying the same goddamned thing.

The paid off politicians say that Israel is our friend, but for sure it is the most lethal enemy Americans have ever had.

The one thing we know for sure about our government is that it doesn’t tell the truth about what it is doing.

It says it wanted to rescue Libya from a terrible dictator who guaranteed free college and medical care for all of its citizens, but then bombed the prosperous nation back to the Stone Age with something called a No Fly Zone, then raped and murdered its leader in the middle of a street, and turned the whole country into a failed state that can’t even protect or feed its starving citizens.

This is the effect America either has had or will have on every country in the world, and this is the plan the Jews have for the American people. It’s the same plan they have for the people of Gaza.

The only allies America has are those that are terrified of being annihilated by the Jews’ U.S. war machine, and those countries that thumb their noses at the mass murdering Jewmericans are at risk of total destruction at any moment.

And the vast majority of Americans, though they themselves are being deprived of both their liberty and their money every day, are very proud of their reputation as vicious killers, and they have the delusional gall to treat their military personnel as heroes, when they are really mass murdering, drug addled psychopaths unable to even comprehend their own behavior until they come back home and commit suicide when they finally realize what they’ve done.

People who try to stand up for their rights under the Constitution they thought they had are being turned into the new terrorists, and this is what Jade Helm is really about: the U.S. government intimidating people standing up for their rights into completely docile and obedient silence, or else they will suffer the wrath of this new Israeli-trained U.S. combo army and police force coming to shoot your dogs, assault your grandmothers and rape your daughters.

Don’t think this happens? Just watch how your local police force behaves. And don’t expect any justice in the courts. They’re dominated by Jewish judges who protect only the Jews and their lackeys, just like the Department of Homeland Security.

So Jade Helm isn’t anything new. It’s merely what the Jewnited States has been doing to the rest of the world brought home to keep the uneducated, unhealthy, cowardly and semiconscious goyim in line.

Think I’m kidding? Go ask a cop about the Constitution. But don’t ask a judge, a politician, or a president. They’ll all tell you it’s just a goddamned piece of paper, and probably strip search you just for asking.

And don’t ask a doctor for help, especially a psychiatrist. They’ll turn you into a drug addict that will radically shorten your lifespan.

Don’t ask a teacher or a lawyer, either. They’ll turn you into the police as a dangerous radical who doesn’t believe Muslims brought down the Twin Towers.

You already probably know that you can’t mention to your neighbor that you know the Holocaust never happened because if they even hear a whisper of that, they’ll turn you into the authorities for treason to the preposterous version of history that the Jews have jammed down our throats.

And of course, don’t protest when your children are taught in first grade how to use condoms and that homosexuals eager to grope them are really special people who deserve our compassion and understanding, or the government will come and take your children away from you. This is no exaggeration.

Same with black people looting your local grocery stories. They need our compassion and understanding, according to our president and his “wife”.

All the cops now have been told that patriots who talk about the Second Amendment are the real threats to our country, and the really good people are the dark-skinned immigrants who only want to impose their African customs upon us and live happy lives from the welfare payments we pay to support them.

Turning patriots into terrorists has its reflection in turning terrorists into patriots, as our government lends substantial financial support to outlaws undermining nations Israel doesn’t like and funnels funds at home to agitators at home who take advantage of deliberate police provocations in big American cities to foment discord, encourage looting and trigger an even more repressive police response to crack down on the average American citizen who hasn’t really done anything wrong . . .

. . . except pay the freight for all those immigrants from all over the world who have come to sponge off the white people who built America into something that was once quite wonderful.

It also constantly encourages the heroism of alien refugees who invade the shores of otherwise stable nations, overwhelming social systems, harassing peaceful and prosperous citizens, and benefitting from ad hoc social programs that undermine the welfare of all these countries, all part of the Jewish destabilization program to throw all nations into chaos in order to control them from central Jewish money dispensing authority.

Jewish propaganda has hypnotized Americans into a criminally irresponsible stupor. Americans have had their country stolen from them, and they’re going to do have to do something pretty radical if they ever hope to get it back.

If the Jews were no longer in control of the money supply, they would not be welcome anywhere on this planet, which is a very desirable idea that needs to happen if human civilization is ever to find peace with itself.

For centuries Jews have believed they are above the laws of God and man. For this abomination and their constant and continuing crimes against humanity, they should be punished, very severely.